Are the faults of capitalism curable, or are they instead symptoms of a chronic disease? This is the question posed by Martin Wolf:

There is much to admire in this piece. But I fear it understates the problem with capitalism.

The Bank of England has given us a big clue here. It points out that the rising profit share (a strong sign of increased monopoly) is largely confined to the US. In the UK, the share of profits in GDP has flatlined in recent years. Few, however, would argue that UK capitalism is less dysfunctional than its US counterpart. Which suggests that the problem with capitalism is not increased monopoly. 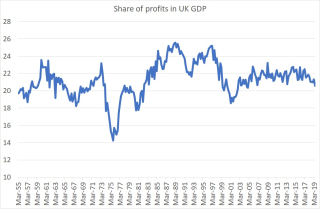 So what is it? Here, I commend some brilliant work by Michael Roberts. Many of the faults Martin discusses have their origin in a declining rate of profit (pdf) – a decline which became acute in the 1970s but which was never wholly reversed.

The causes of this decline are many and debated: an over-accumulation of capital in the 1960s and again in the tech bubble; increased worker militancy in the 60s and 70s; greater competition both from overseas and internally (see for example William Nordhaus’s work); a slower rate of innovation in many sectors; an inability of shareholder-owned firms to exploit potential profit opportunities; weak aggregate demand; and so on.

Granted, actually measuring the rate of profit is fraught with difficulty, due to myriad problems in measuring the capital stock. But the fact that capital spending has been weak for many years (before Brexit) suggests that incentives to invest are weak – one plausible reason for which is low profitability.

The financial crisis was a symptom of this. Imagine there had been an abundance of profitable investment projects in the real economy in the early 00s. The savings glut and fall in bond yields would then have financed these so we’d have seen a boom in investment, jobs and incomes. But there was no such abundance, so the savings glut instead financed a bubble in housing and credit derivatives which ended in crisis.

Many of the things social democrats like Martin deplore about capitalism are in fact responses since the late 70s to this crisis of profitability. The assertion of management power – a symptom of which is high CEO salaries (pdf) – is a (successful) suppression of worker militancy.  Privatizations are an attempt to expand the realm in which capitalists can make profits. Financialization is the result of a shift away from low-profit activities in the real economy. And rent-seeking and cronyism reflect attempts to sustain profits in the face of competition and crisis.

Stagnant productivity tells us that these measures have not wholly worked, in part perhaps because the same inequality* they have generated tends to depress productivity growth.

If all this is true, or roughly so, then the problems Martin describes are not so easily cured. When Martin says that “fixing this is a challenge for us all” he is understating the case.

But is it true? The way to find out is to see if attempts to reform capitalism actually succeed. Mirabile dictu, there are even some proposals here that do not come from the left. Sadly, though, one effect of capitalism’s crisis has been, as Martin says, to so degrade democracy as to take intelligent economic policy off the agenda.

* Yes, UK inequality stopped rising a few years ago. But the damage it does is still with us. If a man has been hit by a bus, you do not restore him to health merely by stopping the bus.

Newsletter: The Recovery Is Losing Momentum

Combating the Political Power of the Rich: Wealth Taxes and Seattle Election Vouchers

Survey: Majority of Americans Are Confident They Can Cover Expenses This Year

pribizco - July 9, 2020
0
The Covid-19 pandemic and resulting shutdown measures have resulted in a deep recession for the global economy. Despite this, we found the majority...

Newsletter: The Recovery Is Losing Momentum

pribizco - July 9, 2020
0
This is the web version of the WSJ’s newsletter on the economy. You can sign up for daily delivery here. Slow Ride The nation’s fledgling...

pribizco - July 9, 2020
0
30-second summary: Ceros enables marketers and designers to develop content without the need for writing code. The industry is projected to be worth over $400...
Share Market Pro is your Markets, Finance, and Economy Blog. We provide you with the latest breaking news straight from the Finance Industry.
Contact us: contact@sharemarketpro.com

A Humble State with No Motocarde

John Rossman on the Principles and Mechanisms of Business Growth