I was going to use this graph as my motivation:

Heightened trade policy uncertainty has been associated with a decelerating and then contraction of world trade volumes – certainly cause for worry.

However, with the news that the Trump administration is contemplating restricting capital flows to China, I fear I might have to devote some time to how Trumponomics might encompass the emplacement of capital controls on the US.

Consider a map of financial openness in 2017 (normalized index, 1 to 0. The darker, the more open, as measured by the Chinn-Ito de jure index. 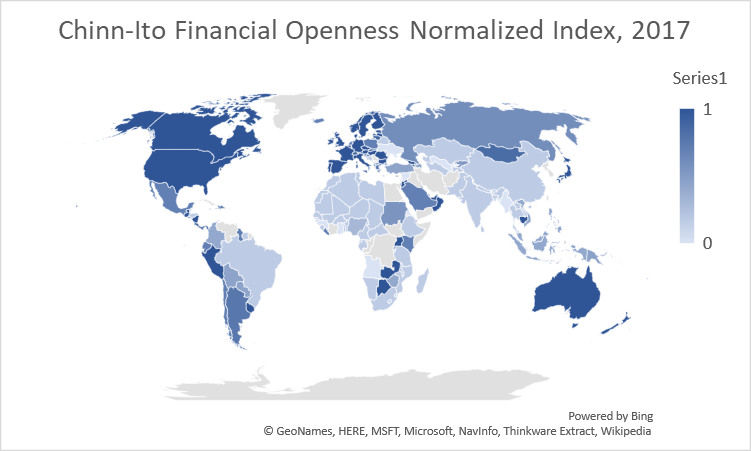 Right now, the US is one of the most financially open economies in the world, which when combined with strong institutional development, has resulted in the US being a financial center. Restricting capital flows would result in making the US show up as “whiter” in the map above.

My view: willy-nilly attempts (after all, who thinks the current policy framework is coherent?) to punish China by closing the American economy will likely cause tremendous collateral damage.

The Great Society: A Libertarian Critique

The Great Society: A Libertarian Critique

pribizco - July 12, 2020
0
The Great Society is the lineal descendant and the intensification of those other pretentiously named policies of twentieth-century America: the Square Deal, the...

pribizco - July 12, 2020
0
Hello, unfortunately I've accumulated about a little over $20k on credit card debt. With the pandemic and losing hours in my...

pribizco - July 12, 2020
0
Tom Frieden: Weekly Roundup https://threadreaderapp.com/thread/1281762304158240770.html: ‘US lagging in control, surging in cases. Only the Northeast is at all reassuring, and those gains are...
Share Market Pro is your Markets, Finance, and Economy Blog. We provide you with the latest breaking news straight from the Finance Industry.
Contact us: contact@sharemarketpro.com

Henderson and Hooper on Why Some Drug Prices Are Too Low,...