What is really driving the Democrats crazy is that they still refuse to comprehend why Trump was elected to begin with. He was an anti-career politician. Even the Republicans did not get it. This impeachment nonsense would stick ONLY if the people actually believed that Biden and Hillary were honest and Trump was wrong. But Biden’s son getting hired in Ukraine when Ukraine was seeking aid from the USA just does not look ethical regardless of the situation. Hillary’s emails and her brother getting a contract for a gold mine when he had nothing to do with mining just does not seem honest.

The general polls are showing that this latest scandal is just another trumped-up version of Russiagate against Trump. At the end of the day, they will need 2/3 of the Senate to remove Trump, which they will never get.

They have turned politics into a corrupt sewer and the stench is overwhelming the nation. There is just no return to a normal government that at least functions. From here into 2032, it will only get worse. 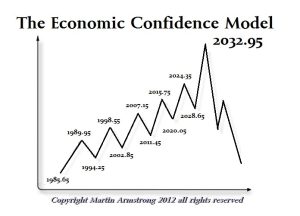 Even AOC overthrew a career Democrat they expected to be speaker of the House. She won for the very same reason as Trump — she was the anti-career politician. Those in Washington just do not comprehend that the people are fed up with all their lies and nonsense. This is BY NO MEANS a Republican v Democrat confrontation. We have moved beyond political parties but they do not wish to see it that way for it means having to accept responsibility for all their mismanagement.

You need not even be pro-Trump to see the incompetence in Washington. Instead of solving problems, the Democrats simply oppose whatever Trump does and seek to remove him. They are idiots for even if they regained the White House, the Republicans will do the same to them. Functioning government has ceased to exist. This is exactly what the computer projects into 2032.

Even if we look at the Pi Turning Point on the previous wave that began 1934.05 with Roosevelt confiscating gold, 31.4 years later was 1965.45, and again on Wednesday that week is when Vietnam started to become a warzone. U.S. Secretary of Defense Robert S. McNamara announced in Washington that 22,000 additional American troops were being sent to South Vietnam. The additional deployment would raise the number of U.S. soldiers and officers in South Vietnam to 72,000. That would eventually grow to 9,087,000 military personnel who served on active duty during the Vietnam Era with the peak in troop strength reached 543,482 (April 30, 1968). A total of 58,202 were killed in action with 303,704 wounded.

These Pi targets have been rather important political-economic events. Even in Mexico, 1913 was the Mexican Revolution.

As our dedicated digital sales and marketing coach, how will you help us?

As our dedicated digital sales and marketing coach, how will you help us?

pribizco - September 22, 2020
0
Here’s an uncomfortable truth: most CEOs are in the dark about how sales happen. They might believe that if their company offers a...