Should he? FRB Minneapolis Fed President was at UW Madison today, and stated:

“The fact that the yield curve is now uninverted gives me some indication that we have taken the brakes off the economy,”

Should we rest easy? In some sense, the answer is “yes”.

Take the plain vanilla term spread model;  run a probit regression of recession 12 months ahead on the simple 10yr-3mo spread, and one obtains an 50% probability of recession in August 2020, declining to 39% by October. This point supports Kashkari’s view. In addition, as many have pointed, the historical correlations may not provide a reliable guide to recession probabilities, given the drastic change in the size and sign of the term premium, and the implied recession probability is actually substantially lower.

The predicted probability of the recession peaks at 5% in April 2020.

However, one could let the data speak, and allow the coefficient on the term spread and (the negative of) the term premium be unconstrained. Doing so leads to the following regression estimates.

Notice the McFadden R2 increases substantially, while the sum of squared residuals drops. A Wald test for equality of coefficients on spread and (negative of) tp10 rejects wildly (p-value = 0.0000).

In Figure 1, I show the various spreads (unadjusted, adjusted, and unconstrained adjusted).

In Figure 2, the associated probabilities are shown. The unconstrained specification confirms that Kashkari should be reassured; the probability of recession falls from 35% to 26% in October. But maybe not too relaxed. 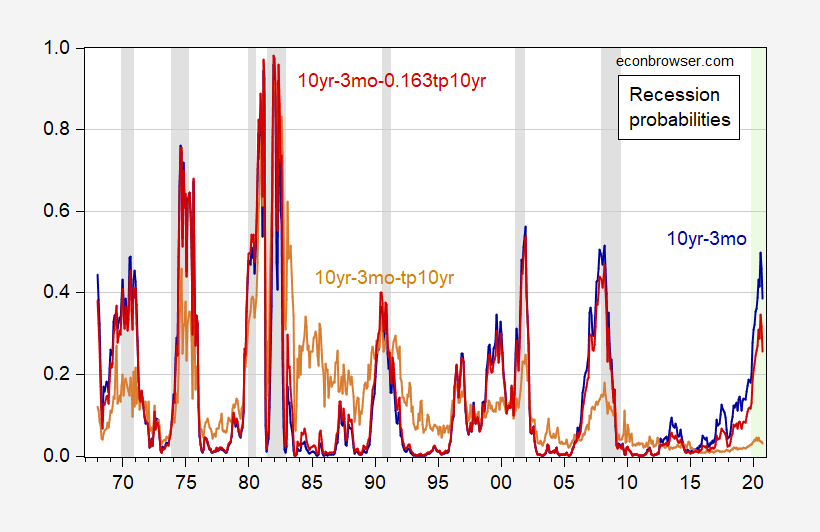 Get a $150 Allowance For Glasses With VSP Insurance

pribizco - April 1, 2020
0
Wimbledon was canceled on Wednesday because of the coronavirus pandemic, the first time since World War II that the oldest Grand Slam tennis...

Get a $150 Allowance For Glasses With VSP Insurance

pribizco - April 1, 2020
0
Some of the links in this post are from our sponsors. We provide you with accurate, reliable information. Learn more about how we...

pribizco - April 1, 2020
0
Peter Sinclair died yesterday, after many days in hospital with covid-19. It’s a heavy blow. Peter was an inspirational economics teacher and a...
Share Market Pro is your Markets, Finance, and Economy Blog. We provide you with the latest breaking news straight from the Finance Industry.
Contact us: contact@sharemarketpro.com

Responses to Comments on My Review of Open Borders, by David...

Total Return versus Price Only