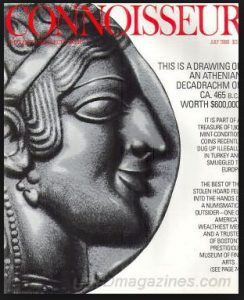 QUESTION: I understand that the Koch brothers bought ancient coins. Is there any truth to that?

ANSWER: Oh, yes. William Koch was involved in a very famous case involving the Athenian decadrahms. There was a hoard discovered in Antalya by a television repairman and two other people back in 1984. They found a hoard of 2000 ancient silver coins with a metal detector. The hoard contained the rare Athenian decadrachms, which were produced as a commemorative 10-drachma coin. There were only 7 previously known examples. The Elmali Hoard contained 14 of them and became known as the “The Hoard of the Century.” The first one sold for $600,000 dollars, easily breaking the old record. The billionaire, William Koch of Boston, bought 1,800 of the coins for $3.5 million dollars. The Turkish Government knew that the treasure had been smuggled out of the country, but after it was taken across the border they didn’t have the slightest knowledge of its whereabouts. The treasure disappeared.

Based on the evidence, the Turkish Government started legal proceedings in Boston. The judge gave an important interim judgment in Turkey’s favor. Koch lost the hoard to Turkey.

Air Canada (TSX:AC): Buy it Now or Avoid it Like the Plague?

How to create a monthly content marketing ROI newsletter (+ examples)

Air Canada (TSX:AC): Buy it Now or Avoid it Like the Plague?

pribizco - August 8, 2020
0
Investors who stayed their hand and didn’t tie their capital to a sinking Air Canada (TSX:AC) until they saw the results of 2020’s...

How to create a monthly content marketing ROI newsletter (+ examples)

pribizco - August 8, 2020
0
Day in and day out, you're busting your little booty to get revenue-generating content produced and published. As the days, weeks, and months...

pribizco - August 8, 2020
0
Welcome to my weekly book update post where I share what books I read this past week + my honest thoughts and star...
Share Market Pro is your Markets, Finance, and Economy Blog. We provide you with the latest breaking news straight from the Finance Industry.
Contact us: contact@sharemarketpro.com