QUESTION: Mr. Armstrong and thank you for what you are doing for us regular people. For my first ever question for you, would you please explain as simply as possible exactly what the REPO market is and how it works and how it affects our multi-faceted financial world.
I am truly grateful for your work and communication.
GLH

ANSWER: The REPo Market is where banks will post AAA securities and borrow against them for the night. Normally, the big banks like J.P. Morgan provide over $300 billion in liquidity daily which allows banks, hedge funds, and institutions to raise cash for the night. When the banks withdrew from lending into the Repo Market, the Fed was compelled to inject cash and thereby lending into the Repo market to prevent the short-term interest rate from rising as it did to 10% on September 17th, 2019.

A Reverse Repo (RRP) injects the purchase of securities with the agreement to sell them at a higher price at a specific future date. The party selling the security to raise cash in the market agrees to repurchase the securities (repo) from the lender at a future point in time which is known as a Repurchase Agreement (RP). Repos are classified as a money-market instrument, and they are usually used to raise short-term capital. 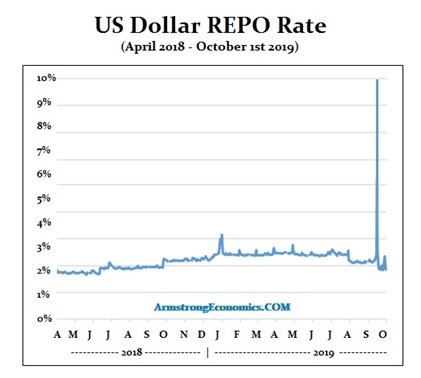 This is not a market that is open to the public. However, it is the basic market where everything else is factored on top of this rate. If the Fed did not intervene, then short-term rates would rise and instead of the consumer paying even 20% on a credit card, it would have jumped as must as 10%.

Here the economy is not declining and unemployment is back to the 1960s. All the talk about QE makes zero sense for these people do not understand what is taking place and it takes professionals in the field to grasp this issue and they cannot speak since they are under confidentiality agreements.

What is Values-Based Investing? Plus How to Get Started

'I Feel Sorry for Americans': A Baffled World Watches the U.S.

What is Values-Based Investing? Plus How to Get Started

pribizco - September 25, 2020
0
Some of the links in this post are from our sponsors. We provide you with accurate, reliable information. Learn more about how we...

pribizco - September 25, 2020
0
I read some claims that Covid-19 fatalities are declining. I want to — again — remind readers about the hazards of interpreting (1)...

'I Feel Sorry for Americans': A Baffled World Watches the U.S.

pribizco - September 25, 2020
0
BANGKOK -- Myanmar is a poor country struggling with open ethnic warfare and a coronavirus outbreak that could overload its broken hospitals. That...
Share Market Pro is your Markets, Finance, and Economy Blog. We provide you with the latest breaking news straight from the Finance Industry.
Contact us: contact@sharemarketpro.com

The pleasures and perils of precrastination