Charging stations are popping up all over the U.S. and with more than 1.3 million electric vehicles (EV) on the road today, it’s for a good reason. While the concept of driving an electric vehicle is appealing to many, nationwide adoption is still far behind gas-powered cars with an overall estimated 272 million vehicles in the U.S.

Considering such a large discrepancy, we had to know — who can afford an electric car in the U.S.? And, what deters Americans from driving electric vehicles?

How much do electric vehicles cost?

Cost is a major decision-making factor when it comes to purchasing a car, whether electric or not. While there are millions of affordable gas-powered vehicles on the market, both new and used, there are less options for those who are looking for electric vehicles.

To get an understanding of how much it would cost to purchase a new electric vehicle, we took the top electric vehicles ranked by Edmunds, both economy and luxury models, and ranked them by the manufacturer’s suggested retail price (MSRP).

We found that it can cost nearly $30,000 to purchase a new, highly ranked electric vehicle.

Compared to Edmund’s list of best gas-powered sedans, which can start as low as $15,000, electric cars still have a long way to go to become affordable.

How much should you spend on a vehicle?

For many people, there’s no freedom without a car. Only 5% of U.S. workers use public transportation to commute to work everyday, leaving a vast majority of Americans to rely on their own mode of transportation — a vehicle or a bike.

That freedom doesn’t come cheap. In fact, the average price of a new car in the U.S. is $36,718, a price that’s unaffordable for many yet still on the rise. A question that many ask themselves when in the market for a vehicle is — what can I afford?

There are many factors that come into play when planning your finances and there’s no definitive guide as to how much you should spend. Some experts say you should spend under 15% of your salary on your car, while others say you can afford a car that’s equivalent to half your salary. One thing is for sure: your debt, monthly expenses and credit score should play a big part in that decision. Not to mention the costs associated with having a car such as car insurance, fuel and regular maintenance.

According to the American Community Survey (ACS), the median household income in the U.S. is $61,937. By using a car affordability calculator, that means that the maximum that an average household can spend on a car is $21,678. Depending on the interest rate of the loan, down payment and if you’re trading in a car, that monthly payment shouldn’t exceed $516.

By raw numbers, we found that buying a new car in the U.S. is unaffordable for the average American. But, how’s that play into the affordability of electric vehicles (EV)?

As we mentioned, the maximum that an average household can spend on a car is $21,678. With the cheapest new electric car on the market being the smart EQ fortwo starting at $26,740, that doesn’t leave much possibility for an average American to drive a new electric vehicle.

Using the car affordability calculator, you would need to make an annual income of over $76,400 to afford the lowest priced new electric car on the market, and that’s taking into consideration the car insurance, fuel and maintenance as a factor. 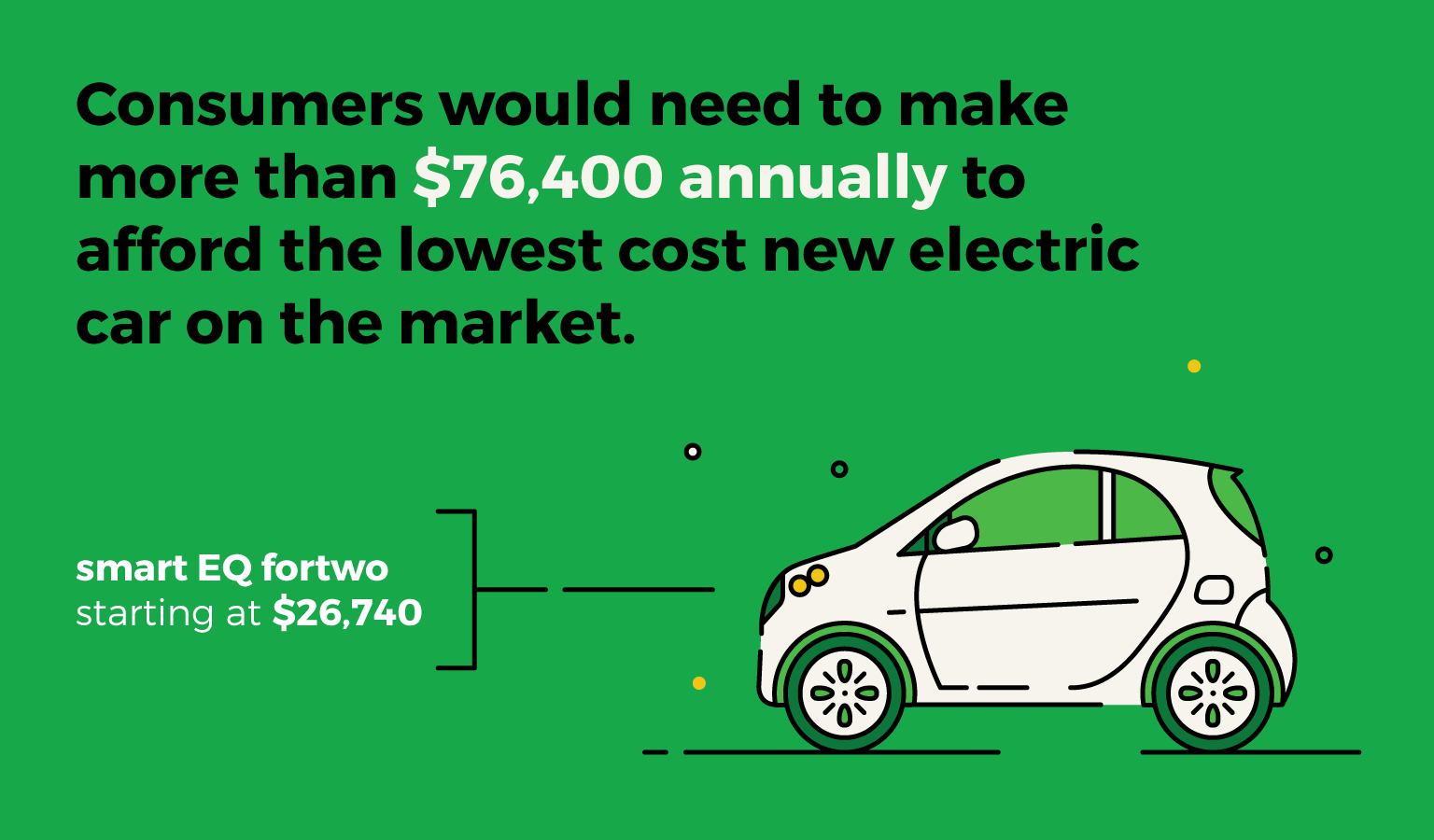 Like we mentioned before, it’s an important factor in your other monthly costs when purchasing a vehicle. While you save on fuel costs, car insurance can take up a portion of your monthly budget. Auto insurance quotes are said to be on average 21% higher than gas-powered models. The cost to repair electric vehicles tends to be higher than gas-powered, hence the discrepancy.

ValuePenguin found that insurance companies always increase their prices for electric cars, but the rates are very different. They found that State Farm has the closest quote with electric cars being 7 cents higher per dollar than for gas-powered vehicles to be insured.

However, there are typically plenty of options for used electric vehicles under the $10,000 range depending on the market you’re buying in. Opting for a used versus a new electric vehicle can help lower the cost of your insurance premium too. Let’s take a look at the benefits of driving an electric vehicle and what Americans think about them.

What are the benefits to driving an electric vehicle? 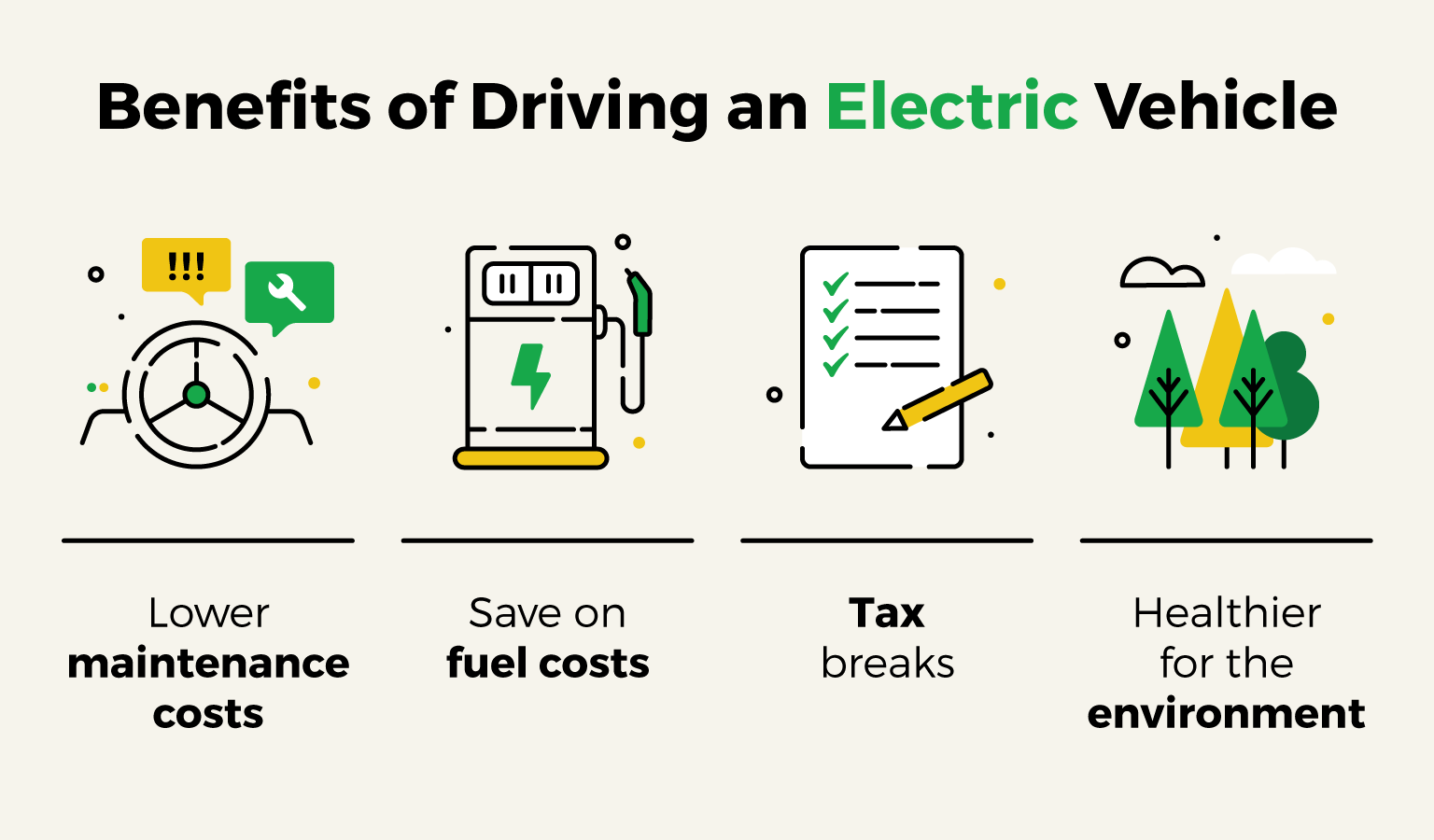 According to the Edison Electric Institute (EEI), there were 1.3 million electric cars on the road as of September 2019. That number is said to reach over 18.7 million by 2030. This 10 year projection alone shows that there are many benefits to driving an electric car for both budget and environmental reasons, which include:

What do Americans think about electric vehicles?

Given the projected amount of electric vehicles to be on the road within the next 20 years, we had to learn more about American’s take on them. And, more importantly: who actually wants them.

Our biggest takeaway? That the decision to go electric isn’t all based on costs.

Dozens of outlets claim that consumers aren’t switching to electric cars due to the price, but we found that a majority of Americans (60%) aren’t convinced to ditch gas-powered vehicles just yet. When broken down by gender, age and location, there was a small marginal difference between surveyors, which told us that the perception of electric vehicles is alike regardless of background. 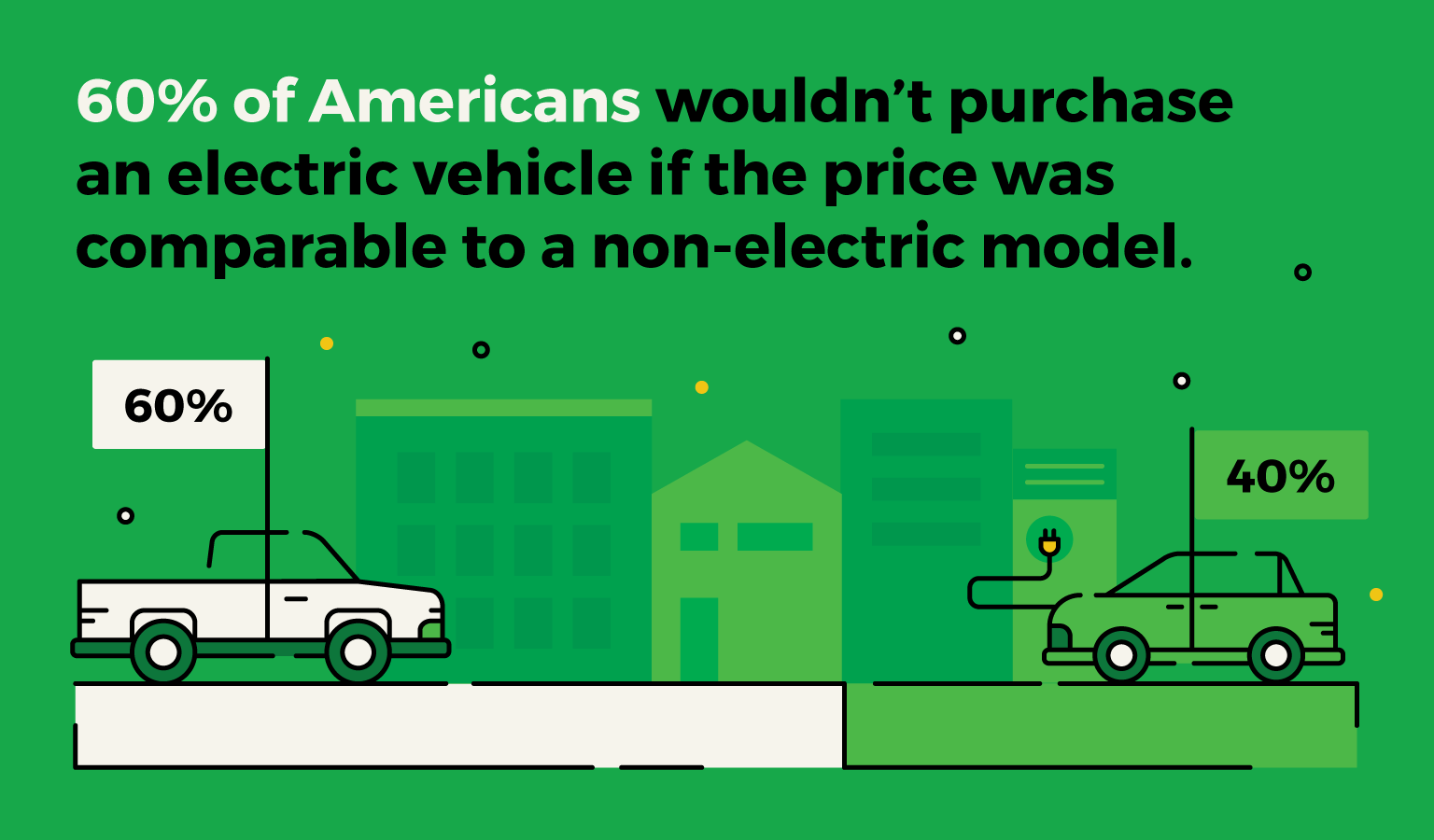 With only 40% of Americans willing to adopt driving an electric vehicle if the price was comparable, we had to know what an major decision making factor would be for Americans to go electric.

33% of Americans would drive an EV for a lower cost, while 26% think that range, or the distance a car can drive between charging, is the most important factor

To understand more about what would be a major factor for Americans to choose an electric vehicle over a gas-powered one, we asked what would incentives the switch.

While cost was the biggest factor, it wasn’t by an overwhelming amount with range, or miles per charge, was just behind. 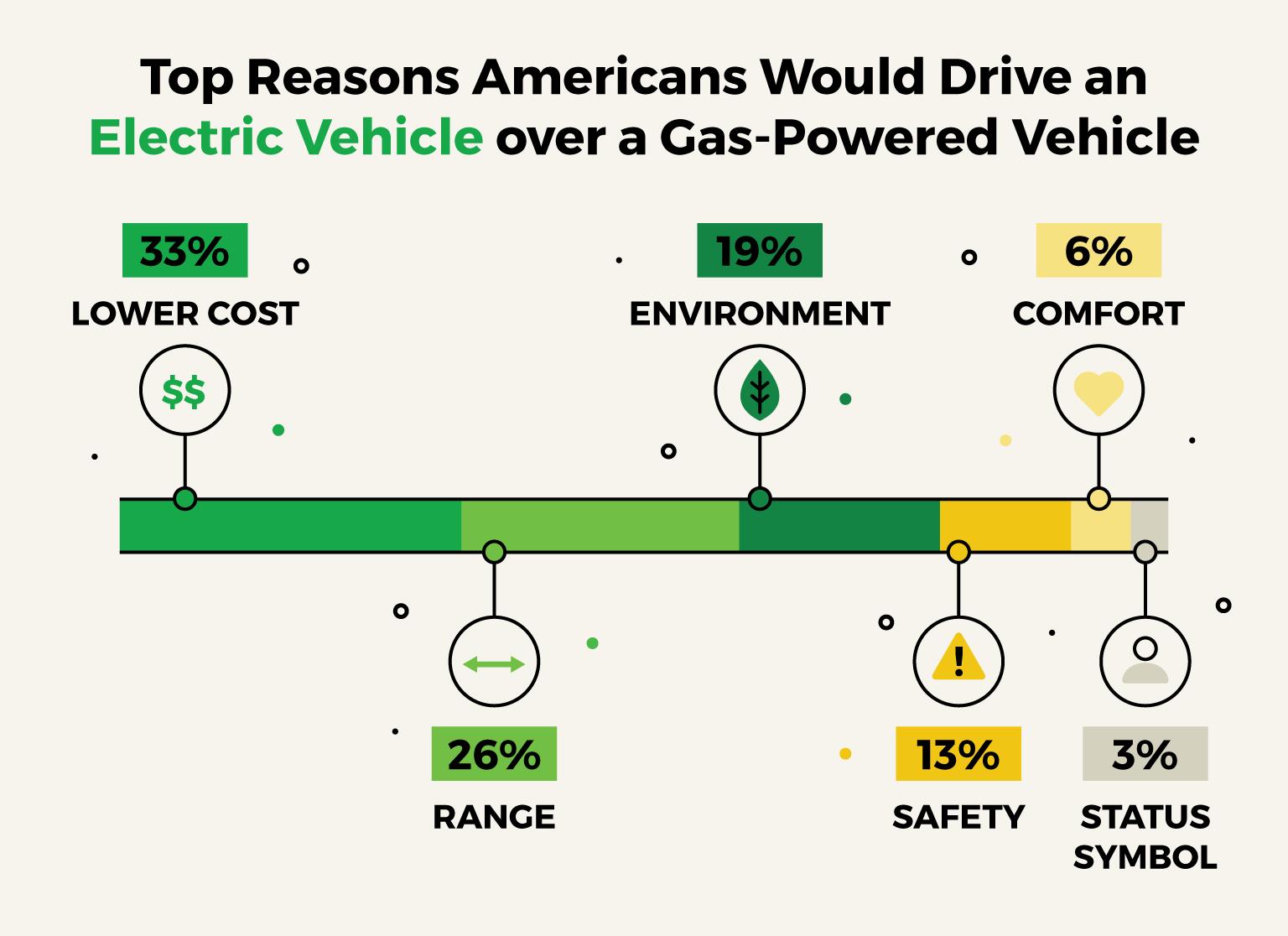 Many new models of electric cars offer a range from 200 to 310 miles per charge. Compare this to gas-powered vehicles where the average fuel economy is 24.9 miles per gallon (mpg). With the average tank of a compact car being from 13 to 19 gallons, that means range in a gas-powered car could range from 323 to 473 miles.

Although the range is comparable for gas-powered cars with smaller tanks, the time to charge could play into that factor as well. While it can take 4 to 5 minutes to fill your tank, drivers could wait from 3 to 12 hours to completely recharge their battery back. Even with a fast charge, it could take more than 30 minutes.

There are tactics drivers of electric vehicles can take to extend the life of their battery, too. The U.S. Department of Energy suggests using economy mode, warming it up or cooling it down while it’s plugged in, anticipating braking, sparingly utilizing accessories and following the speed limit as just a few ways you could make a difference.

When we compared the demographics of surveyors, we found that most were in agreement to what would contribute to the switch, but found it interesting that the only group who had a slight difference was that millennials believe that the cost and environmental benefit are equally as important at 27% each.

In the end, we found that electric cars just aren’t affordable enough for nationwide adoption at all income levels. As the amount of electric cars on the road plans to multiply by more than 14 times in the next 10 years, we can expect car manufacturers to compete by enticing car buyers with lower prices in coming years.

Select all that apply

The Simple Dollar conducted an online survey of 1,000 Americans aged 18 and older to learn what they think about electric cars. The survey consisted of 3 questions fielded January 2020 using Google Surveys.

The post Who Can Actually Afford an Electric Car? [Study] appeared first on The Simple Dollar.

9 Best Drugstore Lipsticks Under $11, According to Beauty Gurus

9 Best Drugstore Lipsticks Under $11, According to Beauty Gurus

pribizco - August 9, 2020
0
The perfect lipstick can cost upwards of $40 — but it doesn’t have to. In fact, many influencers and makeup artists swear by drugstore lipsticks,...

pribizco - August 9, 2020
0
Patrick Deneen, a professor of political philosophy at Notre Dame and critic of liberalism, began a tweet thread on May 17 by asserting,...

pribizco - August 9, 2020
0
Countries including Britain pledged to donate "major resources" to help rebuild Beirut after Tuesday's blast, saying any aid will be "directly delivered to...
Share Market Pro is your Markets, Finance, and Economy Blog. We provide you with the latest breaking news straight from the Finance Industry.
Contact us: contact@sharemarketpro.com

‘America’s Got Talent’ Auditions Are Coming to These 4 Cities