Even at my age, I get a little tingle when a paper is finally published. “Rethinking production under uncertainty” is now out at RAPS (free access for a while) and on my website.

The basic idea is simple.

Our standard way of writing production technologies under uncertainty tacks a shock on to an intertemporal technology.  We might write [ y(s) = varepsilon (s) f(k) ] where  (k) is capital invested at time 0, (s) indexes the state of nature (rain or shine) (y(s)) is output in state (s). That production technology does not allow producers to transform output across states at time 1. No matter high the contingent claim pricer for rain vs. shine, the producer can’t make more in the rain state at the expense of making less in the shine state.

So, why don’t we write down technologies that do allow producers to transform output across states as well as dates? Our farmer could plant wheat in a field that does better in rainy weather than shiny weather, for example. (You can feel an aggregation theory coming.)  The result is a smooth production technology, 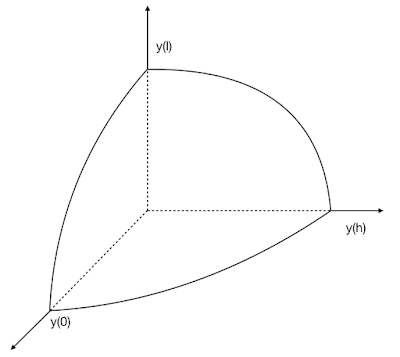 For most of the paper, I investigate a particular functional form.  In addition to capital (k), the proucder can choose the technology shock (varepsilon) in a convex set, modeled as a CES aggregate over states [ E left[ left( frac{varepsilon}{theta}right)^{1+alpha} right] = sum_s left[ pi(s) left( frac{varepsilon(s)}{theta(s)}right)^{1+alpha} right]  le 1 . ] The second equality just writes out the expectation as a sum over states to make it clearer.

If a firm maximizes profits ( max E [m varepsilon f(k)] ), then, the first order conditions include ( m = lambda varepsilon^alpha/theta^{1+alpha} ) where (lambda) is a Lagrange multiplier. There you have it, production based asset pricing just like ( m = lambda u'(c)).

The paper has a curious history. I wrote the first draft in 1993. What took so long? Well, I was never happy with the dynamic extension, and only in doing this update did I sit down and figure out a good solution to that issue. The paper now has a nice analogue to time-separable utility, a version of recursive production and an expression that is separately CES over time and states of nature, which might be a useful alternative to recursive utility as well. I also was never happy with ways of identifying the productivity shock ( theta). Frederico Belo made a crucial breakthrough on that front (ssrn, published paper at JME). And I wanted to do empirical work, which never happened.  Around 1993 I was talking to John Campbell about this and related issues at a conference, and we embarked on “by force of habit.” John convinced me (correctly) to focus on preferences first, and we’d add technology later, but then I moved on to other things as well.

I owe a great debt to Wayne Ferson, who happened on the paper and said “why don’t you publish it?,” and got me going, Nick Roussanov and Jeff Pontiff who shepherded it through RAPS, John Campbell for thinking enough of the idea to write it up in his textbook even though I didn’t write it up in mine, and John and especially Frederico Belo for detailed comments.

5 Things You Should Do If You’ve Been Furloughed

pribizco - July 3, 2020
0
30-second summary: Less than a quarter of marketers are satisfied with the conversion rates they achieve today. A/B and multivariate testing help to put your...

5 Things You Should Do If You’ve Been Furloughed

pribizco - July 3, 2020
0
Being furloughed is defined as a “leave of absence” by an employee for reasons usually involving the economic conditions of their employer. This is...
Share Market Pro is your Markets, Finance, and Economy Blog. We provide you with the latest breaking news straight from the Finance Industry.
Contact us: contact@sharemarketpro.com

Results on Henderson/Wolfers Debate on Ending the Lockdowns

Does anyone actually care about monetary and fiscal “ammunition”?